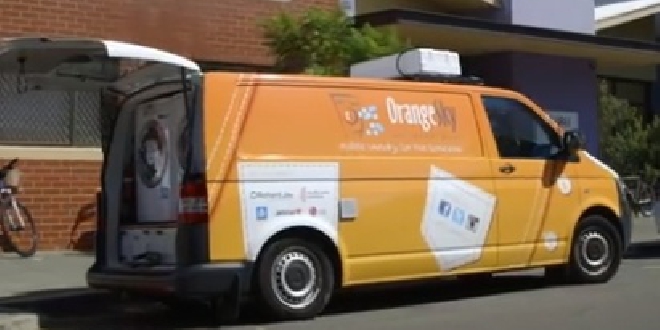 The world's first free mobile laundry service for the homeless has arrived in Mandurah and Rockingham.

The volunteer-run charity gives those in need a service where they can wash their clothes.

Orange Sky started in 2014 when co-founders, Nic Marchesi and Lucas Patchett had a crazy idea to throw washing machines and dryers in the back of a van.

They then hit the streets of Brisbane to wash clothes for the homeless.

Every single day, somewhere in Australia the vans hit the streets to not only do washing, but to provide countless hours of positive and genuine conversation to connect friends on the street back with the community.

Orange Sky service operations manager Lisa Sprlyan has been involved since the first van was launched in Perth last year.

Ms Sprlyan said Orange Sky could compliment organisations that are already helping the homeless and in need, including St Vincent de Paul and Anglicare.

Orange Sky launched in Perth South this week and are now looking for volunteers to fill shifts in Kwinana, Rockingham and Mandurah.

Go to http://www.orangeskylaundry.com.au/get_involved to register.