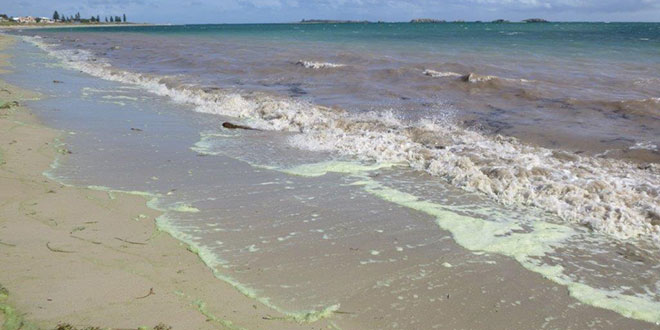 The City of Rockingham is warning people to avoid contact with what appears to be an algal bloom located along the shoreline in a 100 metre stretch of water within Shoalwater Bay near Boundary Road.

The algal bloom is thought to be Trichodesmium erythraeum, commonly referred to as ‘red tide’ or ‘sea sawdust’, which can be identified by a yellow-brown surface scum with the appearance of an oil slick.  When it decomposes it may release a pinkish colour into the surrounding water and then may take on a pale green colour.

Contact with the bloom could result in skin irritation and a rash may develop in sensitive people.   Anyone who comes in contact with algal scum should rinse it off with clean water and seek medical attention if they feel unwell.

Mayor Barry Sammels said “Recreational activities such as swimming, wading, kayaking, fishing, crabbing and shellfish collection in the affected waters should be avoided, particularly where algal scum or discolouration is visible,” he said. “Pets and livestock should also be kept away from the water during the bloom.”

As a precautionary measure health warning signs have been placed along a 300 metre section of beach.

Mayor Sammels said people should understand that this type of algal bloom is naturally occurring, and can be transported by wind and tide and potentially impact other beach areas.  “As a general rule people should avoid swimming in water that is discoloured or has algal scum on the surface”, he said. “Anyone who sees or suspects an algal bloom along other beach areas should contact the City of Rockingham on 9528 0333.”

Due to the many different variables involved, such as how much material is in the bloom and where it has come from, it is not possible to estimate the duration of this event.

The City of Rockingham has collected water samples for assessment, and will continue monitoring the algal bloom and liaising with the Department of Health to provide any further information regarding potential health impacts or effects.