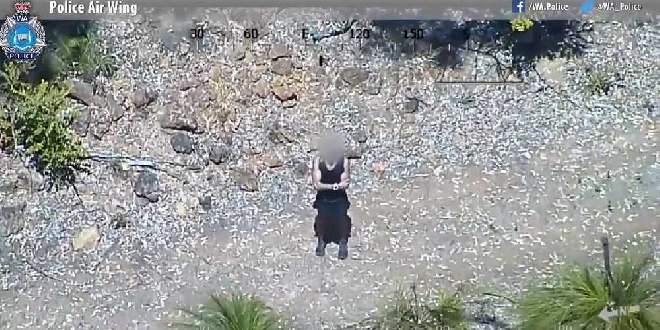 Police have released footage of the moment a man was rescued from bushland in Waroona after he became lost.

The 33-year-old had been running in the Nanga Brook area on Sunday when he became disorientated and ran out of water.

The man called triple-0 just before 11.30am and the police helicopter was deployed a short time later.

Officers from Waroona, Harvey and Yarloop along with a local ranger also set out on foot to search for the man.

"The helicopter crew located the man in an area not accessible by vehicle, and not suitable for landing a helicopter," a WA Police spokesperson said.

"The man was lowered some water and a message that police on the ground were on their way to him.

"Police on the ground reached the man on foot, and based on an initial medical assessment by the officers it was established the man would not be able to make the 45 minute walk back to the police vehicle."

The police helicopter was then sent back to winch the man to safety.

He was then flown to the oval at the Waroona Sporting Complex where he was met by a waiting ambulance.