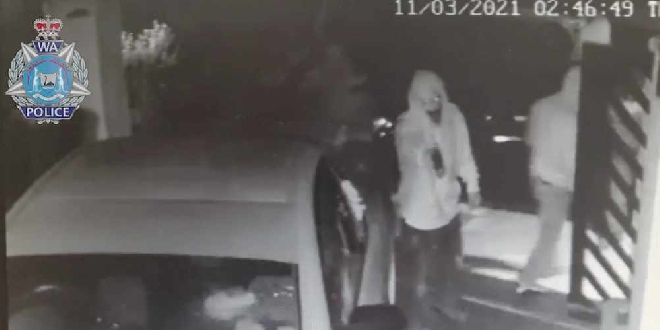 A 36-year-old man has been charged over a shooting at the Port Kennedy home of a Mongols motorcycle gang member.

The shooting happened about 2.50am on Thursday March 11 at the home on Sirius Place.

The Mongols member was not home at the time of the shooting, but a woman and a young child were inside.

Two cars were also damaged during the incident.

Detectives have identified a further eight men involved in the shooting and have released CCTV of the incident in a bid to identify the other offenders.

The 36-year-old Morley man has been charged with unlawful act or omission with intent to harm, criminal damage or destruction of property, unlicensed person possessing a firearm and two counts of no authority to drive.

He is next due to appear before the Perth Magistrates Court today.

The investigation is ongoing and detectives urge anyone who was in the vicinity of Sirius Place on 11 March 2021 who has CCTV, mobile phone or dash-cam vision, can upload the vision via the link: https://wapf.au.evidence.com/axon/citizen/public/shootingporttkennedy11thmarch2021

Anyone with information regarding this incident is asked to call Crime Stoppers on 1800 333 000 or report the information online at www.crimestopperswa.com.au.